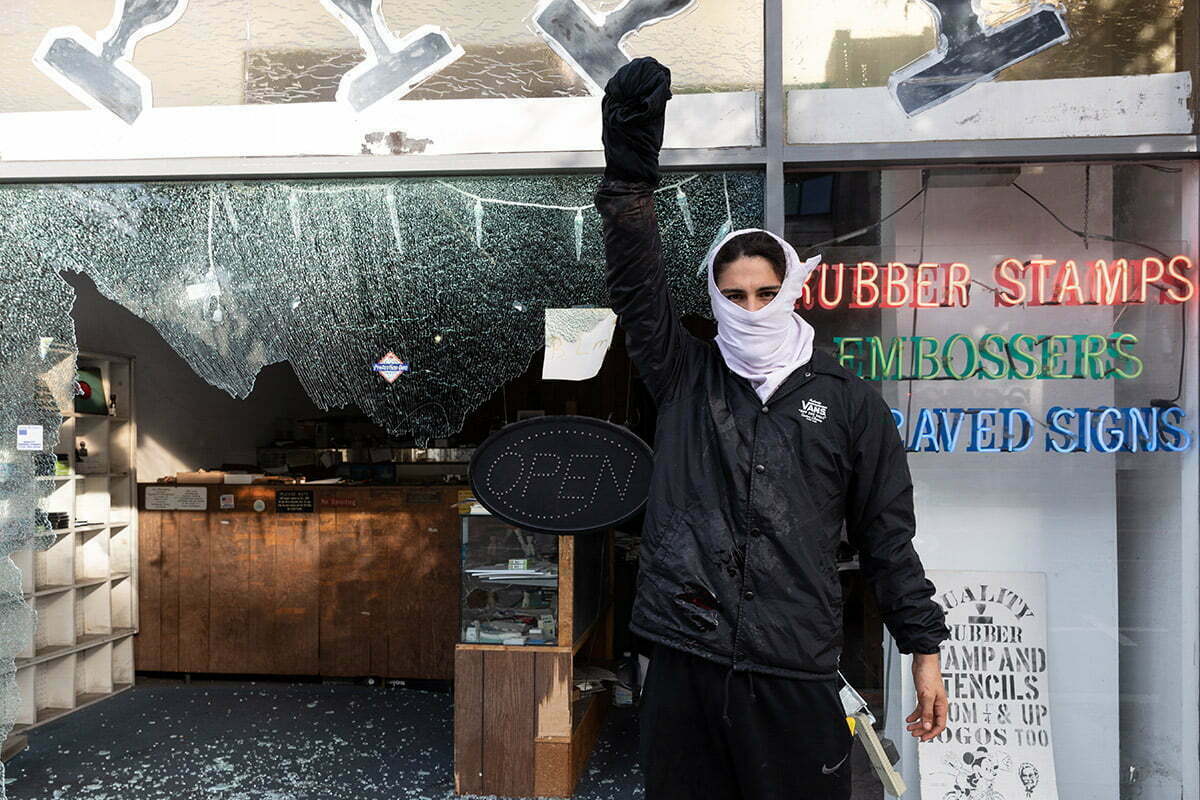 “It’s not us,” responded someone in the crowd. And according to CultureWatch’s Bill Muehlenberg, they may have been right. He believes two other groups are taking advantage of the righteous grief and anger around the murder of an innocent man, and joining the protests for their own reasons.

On Vision’s 20Twenty program last week, Muehlenberg admitted he felt particular concern watching the riots in his home country. “Peaceful protest, it’s part of what democracy is all about,” he said. “It’s in fact how America was founded, so that’s a rich, important tradition in any free and democratic nation.”

But some of the protests have not been peaceful. Muehlenberg says “professional anarchists” are stoking the flames in order to encourage more unrest. “They hate police. They hate capitalism. They hate America and what it stands for, so they’re happy to burn cities down.”

Meanwhile, opportunistic looters, who have no idea who George Floyd was, are jumping on the bandwagon, taking the chance to steal whatever they can carry. “They’re just in it for themselves,” he said.

US President Donald Trump has called out state governors, particularly on the left, for not responding appropriately to keep the peace. “Your whole purpose for being there is to protect your citizens, to protect their property. That’s why you’re elected. If you can’t do this, we will bring in the National Guard. If need be, we will bring in the military to restore order.”

“In Romans 13, that’s one of your key duties of government, to keep the peace, to maintain order, to administer justice, not to allow rioters to run a muck with no consequence. So yeah, sadly, mostly democrat leaders have been very very weak on this.”

Muehlenberg says we should also question why our governments in Australia allowed mass protests last weekend, when just weeks ago police were preventing all gatherings in order to slow the spread of COVID19. Why the double standards? Why the selective outrage?”

We don’t want Churches, we don’t want a guy alone surfing in the ocean, but we’re happy to have what may well be rioting and violent protesters given the green light.

As complex as the situation seems, you shouldn’t feel overwhelmed. Muehlenberg echoed Franklin graham’s call for prayer into the situation. “There’s a million plus Church-going born-again Christians, maybe many more, here in Australia. And yet we look at the country we’re in, and we say are there any Christians anywhere? Who’s praying?”

In John 10:10 (NKJV), Jesus says “The thief does not come except to steal, and to kill, and to destroy. I have come that they may have life, and that they may have it more abundantly”. The worst of these protests, of course, have brought theft, death, and destruction. “Satan is alive and well on planet Earth,” Muehlenberg said. “He is unleashing his terror and rage, certainly at the moment, on American cities.”

So as we watch all the unrest going on around us, we should understand that this is part of a larger battle, and prayer is our shield against evil. “There’s political issues at play. There’s ideology. But behind them all, there’s a spiritual dimension that all Christians at least should be fully aware of, and certainly praying into.”

Why Men Should Pray for Other Men

It’s often a big step for some people to actually believe that God answers prayer. But the Bible calls us to walk and...
20Twenty

Getting Out of Your Comfort Zone to Share Jesus

“Our job is to tell people about Him. To be a witness for Jesus not only in the way we act, but also in giving a...
20Twenty

God’s instructions to the people was to impart their faith, and live it out in front of their children, but...
20Twenty

Hitting the Reset Button on Life

Andrew Pitchford on how to hit the reset button in our increasingly busy culture, and God’s way of renewing our...
20Twenty

Is the Evangelical Church in Spiritual Recession?

Over the past year, Covid lockdowns have threatened our comfort, our health, our work and our economy – but...
×
×