According to Pastor Greg Laurie, our moods are contagious. He urges us to pass on an encouraging frame of mind to those around us. We can all brighten up someone’s day with a smile or a kind word. But we can just as easily steal their sunshine and rain on their parade.

Have a Positive Impact on Others

Other people have a profound influence on us. In his message, How to Be an Encourager, Greg points out that we should learn how to have a positive impact on the people in our lives. It’s really not that hard to do and the rewards are well worth it.

‘Encouragement really matters,’ says Greg. ‘It’s something we need in life. Words also really matter, and so does what we say to other people. Proverbs 25:11 says the right word at the right time is like precious gold set in silver. 1 Thessalonians 5:11 says encourage each other and build each other up. It’s just so important.’

In Hebrews 10:24 we’re told to consider how we may spur one another on toward love and good deeds. Not giving up meeting together is a habit of some but rather encouraging one another and so much more. As we see the day of the Lord approaching, we can all use some encouragement.

‘I don’t know what you’re going through right now in your life,’ says Greg. ‘But I want to say whatever it is, you’re going to get through it. I know what the Bible says. I think of the story of Jesus saying to his disciples, let’s go to the other side of the Sea of Galilee.’

The disciples boarded their boat, and predictably a storm came. The sailors despaired of life, but what did Jesus say? He said, let’s go to the other side. He did not say, let’s go to the middle of the Sea of Galilee and drown together. He did not promise them calm seas, but he promised a safe arrival.

There is a place for criticism and a reality check. That’s why opposites are often drawn together in marriage. It is important if you love someone to tell them the truth. Because the Bible says faithful are the wounds of a friend, but the kisses of an enemy are deceitful. Open rebuke is better than secret love.

We all Need Encouragement

In the Book of Acts, Barnabas steps in at a critical time in the life of the Apostle Paul. Before he was the Apostle Paul, when he was still Saul, the notorious Christian killer, the man who met Christ on the road to Damascus. The problem was a lot of people weren’t believing that Saul was actually now a Christian.

‘But Barnabas says, I’ve talked to you and I know your conversion is real. He even says, let’s go on the road together and share the gospel. Barnabas is helping and disciplining Saul. He’s teaching him to later become Paul because he sees the potential.’

‘We’re all called to be a Barnabas,’ says Greg. ‘Some people want to be the next Billy Graham. They want to be the Apostle Paul. But someone’s got to be the Barnabas working behind the scenes. That person you’re discipling and encouraging may go on to change the world.’

‘Your words and your encouragement matter.’ 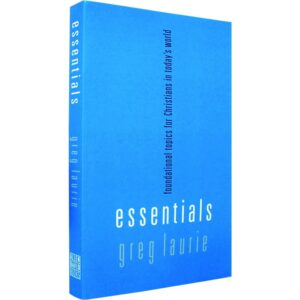 When the winds of trouble blow—across our world or through our lives—we want to know what’s solid, lasting & reliable. Essentials is a panorama of Biblical truth—from the Person of God to Heaven & hell, from navigating these times to preparing for the last days. 20 chapters of straight-forward, easy to read foundational Biblical truth. A resource available from our Vision Store.

This article was inspired by Greg Laurie.

Listen to Greg’s full message below, and for more resources visit our Vision Store.

Sometimes it seems the nations of the world are racing toward greater conflict, even annihilation. What should we as...
Creation, Education, Faith, News

Despite everything Kamal has seen his country go through over the last 50 years, he knows God is building His Church...
Faith, Leadership, News, Politics

‘Heartbeat’ law reinstated just a week after being put on hold.
×