Our Communication Needs to Slow Down 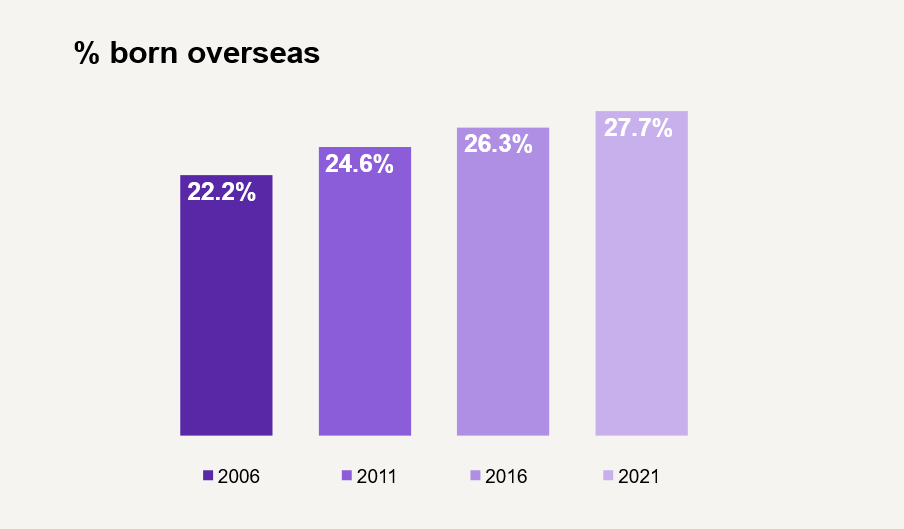 But great leaders know the importance of effective communication and are prepared to learn and adapt.

Alongside cultural changes, there has also been plenty of generational change with more Gen Ys than Boomers now comprising Australia’s population. While the longevity boom is continuing, younger generations have an opportunity to demonstrate greater cultural intelligence by building on the learnings of previous generations.

The latest ABS Census revealed that more than one in four Australians were born overseas (28%), and almost one in two Australians have a parent born overseas (48%). Not only does Australia have a very new community forming, but it also has one of the world’s oldest communities growing. The ATSI community saw growth to over 810,000 people in the 2021 Census, up from 550,000 back in 2011. This important community is now almost twice the size of Canberra’s population.

There has been a steady increase in cultural diversity in Australia over the last two decades.

The migration shift is now showing reduced distance in migration patterns, with the shift from European migration during the last century to Asian migration trends this century. According to the latest Census, the top five largest growing communities all come from Asia. Australia’s Indian community grew by 3.5x more than the Nepalese community over the last five years, which is equivalent in growth to the size of Hobart!

When it comes to the fastest growing communities though, Nepal beat India, growing 2.5x faster and revealing the quick rise of Australia’s Nepalese community over the last five years.

The declining countries of birth in Australia are led by European countries with over 10,000 fewer Italian people in the last five years.

‘No-Religion’ Grows in a Multi-Faith Society

When it comes to understanding people in a community, one interesting facet is to learn how people see the world. Worldview is largely shaped by religious affiliation and while religion in Australia is increasingly becoming a personal topic rather than public one, leaders must understand and engage with the variety of worldviews in the Australian community.

Even with almost two in five Australians identifying with no religion (39%), religious affiliation (or its lack thereof) plays an important part in defining a person’s worldview. The affiliation of individuals affects their view of almost everything in life from the environment to community, to finance and borrowing, and even their personal mental, physical, emotional and overall wellbeing. Whether it is the devotion of daily prayers for followers of Islam or the belief of reincarnation for Hindus, each belief and behaviour reveals what segments of society value and prioritise.

The Pace of Communication in an Era of Varied Worldviews

So how do you get your message across amidst so many differing worldviews? Stephen Covey wisely outlined the importance of listening first, speaking second when he said, ‘Seek first to understand, then be understood’. Listening to community segments to understand values and priorities will help leaders understand how to communicate effectively. Getting important messages through to new, growing and changing community segments is the result of effective communication, not the first step. Listening to learn, precedes speaking to inform.

As Australian homes increasingly speak a language other than English, building trust, demonstrating empathy and pursuing cultural intelligence will be a cornerstone of successful leadership in this VUCA (volatility, uncertainty, complexity, ambiguity) era.

The post In a Diverse Cultural Landscape, Our Communication May Need to Slow Down appeared first on CMAA Syndication and is reproduced with permission.

For more resources on how to proclaim the gospel and speak into the lives of others, visit our Vision Store.

What would you do if you went camping and one of your children vanished? And then days went by. Rachel Shambrook...
20Twenty

This week’s memory verse is Ephesians 5:20 – Always giving thanks to God the Father for everything, in the...
20Twenty

You Have to Want to Change

Pastor Greg Laurie shares how many people are praying for breakthrough in their lives, but not every person wants to...
20Twenty

Business Advice: Is Your Last Impression As Good As Your First?

We all have our own story of dealing with friction. Hours spent on hold, inefficient systems and arbitrary rules all...
20Twenty

Revival. It’s a big word. In the Christian world, most think of a great move of the Holy Spirit. Lots of...
×
×