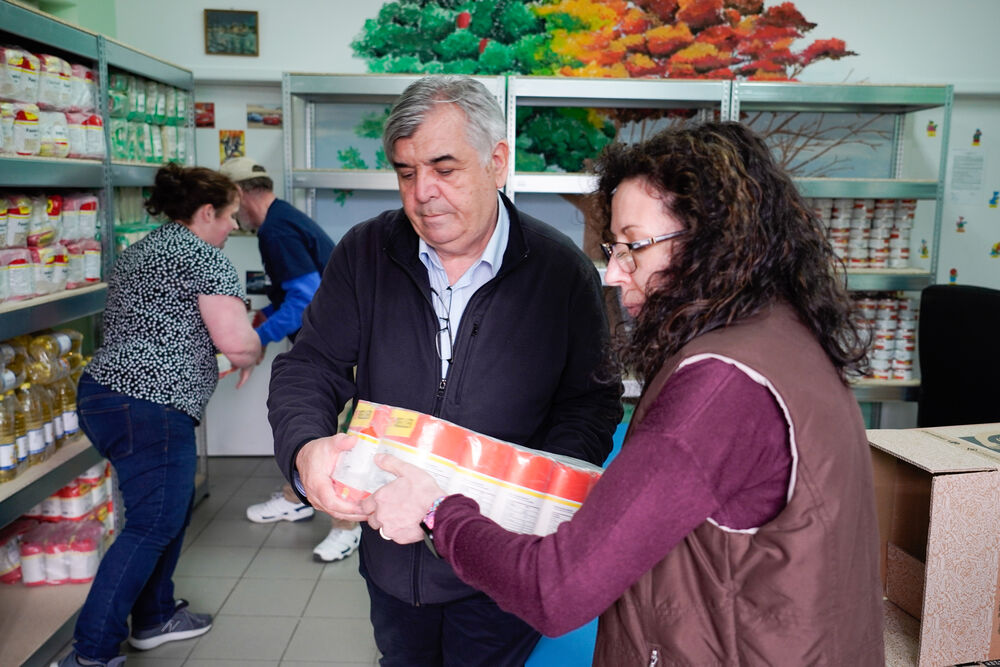 In late February 2022, a three-day meeting was held in Romania to discuss ways to mobilise churches to share Christ’s love with others. The next day, Putin invaded Ukraine and Ukrainians began leaving in droves to neighbouring countries—including Romania. Local believers who attended the meeting quickly responded, seeing the opportunity to put into practise what they had just learnt.

“It was like a wave,” remembered Cornel, the leader of OM’s work in Romania. “Everybody wanted to go to the border and help the refugees.” Other government and aid organisations later arrived, “but the first that was there were the churches.”

The OM team in Romania is working alongside local churches to provide comfort and aid to those leaving Ukraine. “We as OM – that’s in our mandate: to mobilise local churches. So we help them at the border and serve in different ways,” explained Cornel.

According to Cornel, the border paints a heartbreaking picture, as it is difficult to see whole families arrive at the border, only to split apart as the women and children cross over to Romania, and the men remain in Ukraine. “It’s so hard to see people fleeing, coming from their own country with their children in their arms,” he said. “But God changed the situation in Romania and awakened the church, and they are manifesting all kinds of love for these people.”

From driving people to hotels, handing out hot cups of tea or providing a safe place for people to rest, local believers are ready to help new arrivals. “We are there to serve them and do what they need,” said Cornel. The offer of aid is met with varying reactions from surprise to distrust, “but most people from Ukraine are completely amazed to see people from Romania being so open and loving them so much.”

In the southeast part of Romania, just a 10-minute walk from the border with Ukraine, a recent church plant lamented how difficult it was to share the gospel with people in their community. Now, that has changed. With many Ukrainians stopping in the town for help and rest, “there has been, in a way, revival,” Cornel shared. The church plant realised they needed to do things differently to reach out to people; instead of inviting people to church on Sundays, the believers are taking church to the people, serving and worshipping in other ways. The change in approach has led to spiritual conversations with both Ukrainians and town residents.

After talking with those who left Ukraine, the church plant felt compelled to address needs within the country. Utilising their proximity to the border, local believers are collecting food items to send into Ukraine as a way to care for their neighbours.

“That’s our prayer in Romania, to see that passion, to see this movement awakening and to see churches more open to going where the people do not know the gospel,” said Cornel.

With funds donated from believers worldwide, supplies such as food, clothing, generators and more have been distributed both at the border and in Ukraine. “We try to see what the greatest needs are and be where no other people are doing much,” Cornel said.

The easiest way to discover the most significant needs is simple: talking to people. “I’ve been so motivated by Ukrainians coming and saying: ‘It’s nice what you do for us, but you know, friends beyond the border are suffering; can you go and do something for them?'” Cornel said. He and a team crossed the border to see how they could help. Their initial exploration trip led to sending various supplies via truck into the country, including a truckload of antibiotics and other medicine in late May. “We’ve been so blessed with finances and resources,” said Cornel. “I praise God for that kind of unity and sacrifice that led people to give.”

“It’s amazing to see how we can serve God in taking care of the people from Ukraine,” he said.

The power of speech

One Ukrainian woman entered Romania with her two children: a boy about four-years-old and a girl around seven. Local volunteers welcomed her and invited her children to play with them and a few other kids. As Cornel listed the various help options available, the woman began to cry. She explained that her son had been diagnosed with autism, and she had difficulty communicating with him. However, while they talked and her children were playing, the mother saw her son speak to the volunteers without any problems and was overwhelmed with gratitude. “The way God moves among people in these difficult times is super, super great,” said Cornel.

Meeting people where they are

Originally from a Jewish background, Cornel was 15 when he gave his life to Christ. However, “missions was not part of my initial understanding,” he said. While pastoring a large church, Cornel was inspired to “go and do something for those who didn’t accept my invitation to come to church,” he said. Meeting people where they were proved fruitful, and Cornel stressed its importance to other churches.

When the iron curtain fell, Cornel and other Romanian believers were challenged to share Jesus’ love in other countries. Cornel journeyed to India, Brazil and China, where God touched his heart for those who had never heard about Jesus before. His travels abroad motivated Cornel to help mobilise the Romanian church to do their part in sharing the gospel with everyone—whether that be in some far-off place or a neighbouring country.

Rev. Richard Johnson was the first to preach the gospel on Australian soil in Sydney on 3 February 1788. The arrival...
AUSTRALIA, Christian History, Faith, Gospel, News

There’s a good chance that Jesus is tracking you down in a far deeper way than you realise.  He knows your innermost...
Bible, Christian History, Faith, History, Israel, News

Eternal life is more than just living forever. It’s also about quality of life, the people you know, and also...
×