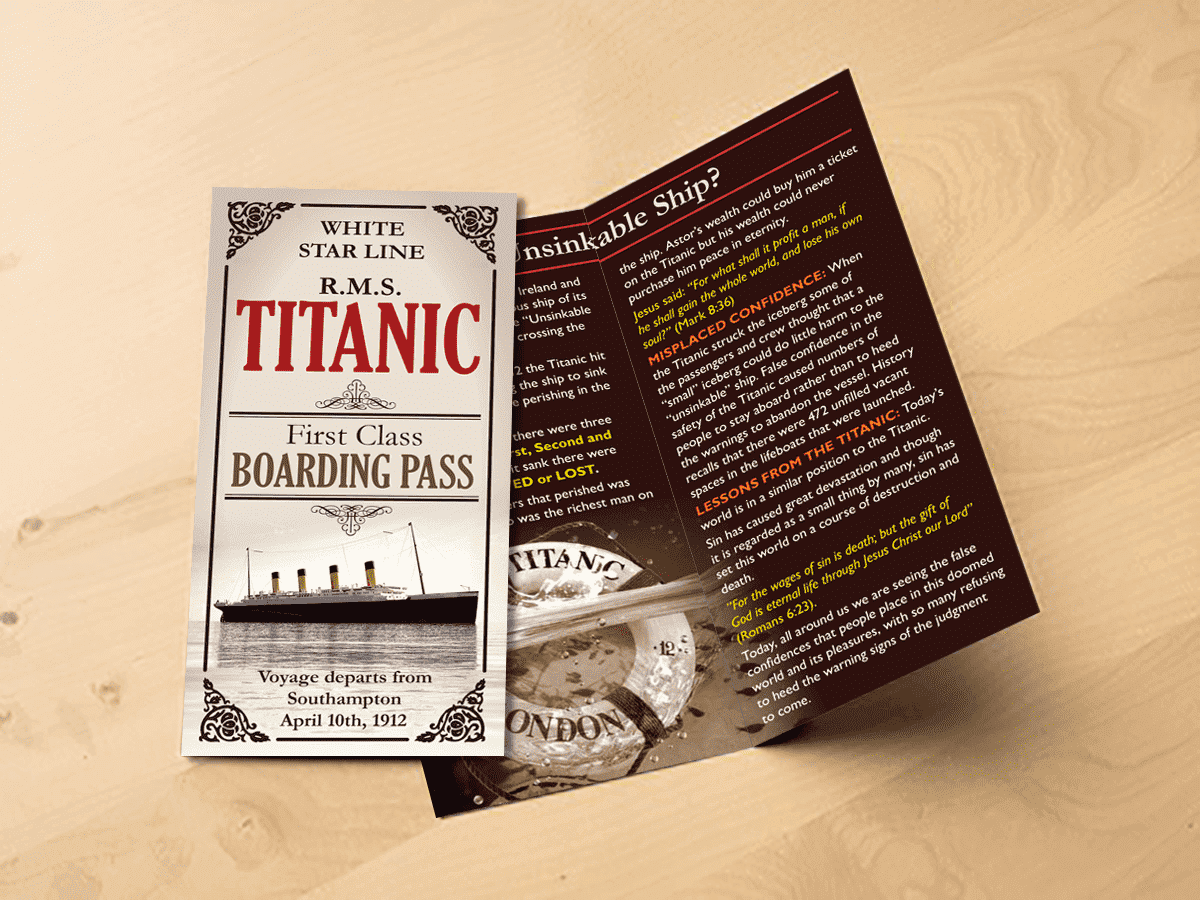 Dressing up on the street to act out something that connects people to the message of the gospel is an interesting idea. Titanic Evangelism does just that and is a concept recently developed by a group of Christians in Newcastle.

The ministry was started with the sole purpose of spreading the good news of the Gospel and providing free resources for believers and those who are seeking biblical truth. They offer high-quality Christian tracts to help churches reach their communities.

Vince Wall, the founder of His Word Media and Pastor of Newcastle Baptist Tabernacle, says that sharing the gospel while dressed as sailors in Titanic uniforms attracts a crowd. He recently joined us on 20Twenty to share a little more about the concept of ‘Titanic Evangelism.’

The Value of Dressing Up

His Word Media produces the tracts and came up with the idea of making one look like an old Titanic boarding pass. ‘What I say to people as I hand out the tract is that it’s the 110th anniversary of the sinking of the Titanic,’ says Vince. ‘I put a smile on my face and people take it.’

Vince has also run a few Titanic outreaches in churches and hosted a dinner with a bit of Titanic trivia. ‘Then I give our message on the Titanic and relate it the gospel,’ he says. ‘I wear a tie and a shirt and black shoes and I look a bit like the captain from the Titanic.’

People come up and ask Vince questions, so he takes the opportunity to tell them he’s a Christian. He also tells them the story of the three classes of people on the Titanic. ‘When the Titanic sank there were only two classes of people, the saved and the lost,’ says Vince. ‘Our world is a bit like that too. It’s sinking.’

In our world today, we’re also on choppy seas. There’s the saved and there’s the lost. As a Christians, we believe in the Bible. We believe there’s a heaven and we’re able to be saved if we place our faith in the Lord Jesus Christ.

Leading People to the Gospel

‘I’m able to lead people to the Gospel using the Titanic theme,’ says Vince. ‘But using a model goes back to Biblical times. In Ezekiel 4, Ezekiel was instructed to take a block of clay and use it to represent the disaster coming upon Jerusalem by the invading Babylonians. He was to construct a small model that would capture the attention of the passers by.’

Because Vince is getting positive reactions from the people on the streets, it makes it easier for him to train people in evangelism, because they’re not getting knocked back all the time. ‘People are actually receiving the tracts and being willing to talk,’ says Vince.

‘This has been such an encouragement for me to train others out on the streets.’

Click the link to order your tracts, or find out more about His Word Media.

Listen to Vince’s full interview on 20Twenty below, and view our range of Christian resources available from the Vision Store.

The Bible is silent on retirement. So what do we, as Christians make of it? And what has retirement got to do with end...
Real Faith

Doug and Karen Stanton fell in love, married and went on to pastor a church together. Unfortunately, that’s when their...
Articles, Christian Living, Marriage

Gina shares some of the tough lessons she learnt during her early years of marriage. Even if you’ve been married...
20Twenty, Articles, Business, Christian Living

Taking Risks vs Steps of Faith

There are two extremes when it comes to risk taking. Some of us are content to play it safe, while others have no...
Focus on the Family

Understanding God’s Plan for the End of Life

A powerful personal story about discovering God’s joy in the midst of chronic pain and suffering. Hope for...
×
×