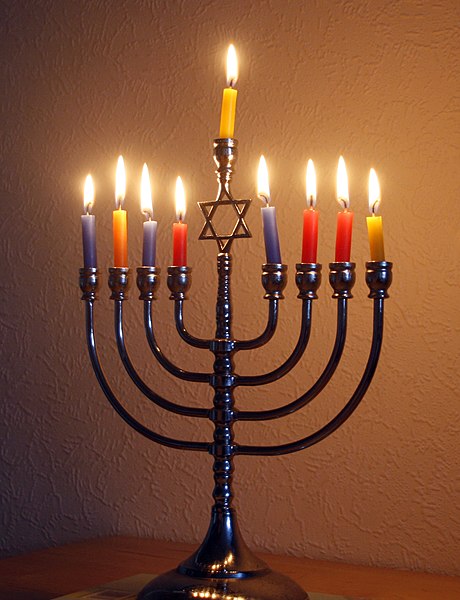 Each year, around the time we prepare to celebrate Christmas, our Jewish friends celebrate Hanukkah.

‘At that time the Feast of Dedication took place at Jerusalem; it was winter and Jesus was walking in the Temple in the Portico of Solomon.’  John 10:22-23,

Strong’s concordance explains the Feast of Dedication this way; ‘In particular the annual feast celebrated eight days beginning on the 25th of Kislev, instituted by Judas Maccabaeus (164 BC) in memory of the cleansing of the temple from the pollution of Antiochus Epiphanes.’

Hanukkah isn’t one of the mandatory ‘Feasts of the Lord’ of which there are seven;

John 10 is the place where Yeshua described Himself as the Good Shepherd and then out of the blue so to speak, the Scripture then says that it was the Feast of Dedication and it was winter. We know that at this time of the year in Israel…that is right now…it’s winter time and flocks and herds are cared for overnight in protected shelters as was the case 2000 years ago. This is just one of numerous reasons we know Yeshua wasn’t really born at this time of year, rather He was probably born around late September, early October when it was still warm and shepherds kept their flocks out in the open fields at night and they themselves protected them.

Why did the Holy Spirit want us to know that it was the Feast of Dedication and that it was winter in John 10? We need to understand that there are no accidents or superfluous information in the Bible, but every word of it was breathed by God the Holy Spirit and is important for our learning and understanding. When something pops up in Scripture and we don’t know what it means, that’s when we’re supposed to start digging to find out what it’s referring to and what we need to learn from it, that’s when we make incredible discoveries, as Dr Chuck Missler says. So what was the Feast of Dedication all about?

Hanukkah and The Feast of Dedication

In Israel’s history there has only ever been two Temples. When the Jews were wandering in the wilderness and afterward conquered the land God promised them, they had a mobile Tabernacle and once they entered the land, the Tabernacle, also known as the ‘Tent of Meeting’ was established at Shiloh where it remained for approximately 300 years but David wanted to honour God by building a permanent and glorious Temple. Solomon his son was tasked with the job and Solomon built a staggeringly magnificent Temple which lasted about 400 years until it was destroyed by the Babylonians.

After the Jews returned from their captivity in Babylon, they began rebuilding the temple under Nehemiah’s leadership and the result was quite a humble building, so humble in fact that many wept and grieved because they remembered the glory of Solomon’s temple. However, when King Herod the Great came to power under the Romans he embarked on a very extensive makeover which was basically a complete rebuild and the 2nd Temple took 46 years to complete and it was magnificent. (Neh, Jn 2:20)

In the year 168 BC, the Seleucid Empire controlled the region and Antiochus IV, Epiphanes was on the throne. He came to the throne through murder and intrigue and he was a particularly nasty piece of work; he was cruel and barbaric and after some failed military campaigns his already simmering hatred of the Jews took a brutal turn and he determined to eradicate Judaism and replace it with Greek paganism instead. He passed laws that forbade the Jews from observing their laws and in particular, the laws pertaining to the Sabbath and circumcision, and disobedience resulted in death. Monthly searches were conducted and if anyone was discovered to be hiding a copy of the Torah, or had circumcised their baby boys or were seen to be observing the laws of the Sabbath they were executed and executed in unbelievably cruel ways.

Antiochus ransacked Jerusalem, took 10,000 inhabitants captive, stole all the treasures from the Temple, he built an altar in the Temple on the Great Altar of Burnt Sacrifices defiling it, then on the 25th of Kislev, which just happened to be Antiochus’ birthday, he brought a sacrifice to the Temple – a pig – and sacrificed it on the altar and ordered a pig to be offered as a sacrifice in every village! To complete his blasphemy and offenses to the Jewish people, he also had an idol to Zeus placed in the Holy of Holies. This act of desecration was given a name, it was known as ‘The abomination of desolation.’

This sparked the Maccabean Revolt and after about 3 years of fighting, the Jewish fighters defeated the Syrian armies of Antiochus and when the fighting was over the Temple was cleaned out and purified and worship was re-established, then on 3rd anniversary of the defiling of the Temple – the 25th of Kislev in 164 BC – the Temple was rededicated. Re-establishing the function of the Temple required pure olive oil – produced under very strict guidelines – for the lighting of the Menorah candelabra which has seven branches; the centre branch is called the servant and it’s from this branch that all the other branches were lit one by one.

The miracle of the rededication of the Temple was that there was only enough oil to last one day and it would take at least a week to produce more oil however, that one day’s portion of oil lasted for eight days straight until more oil was ready.

This is a great story but why is it important for us?

The Jewish people had been celebrating the Feast of Dedication for more than 180 years when it was mentioned in John and they knew exactly what it was all about and what led up to the rededication; they knew who Antiochus was and the vile cruelty he’d meted out on their forebears and the blasphemy he’d committed in their Temple. So when Yeshua was asked by His disciples in Matthew 24 what signs would take place before His return, amongst other things He said this to them:

“This Gospel of the kingdom shall be preached in the whole world as a testimony to all the nations, and then the end will come. Therefore when you see the ‘Abomination of Desolation’ which was spoken of through Daniel the Prophet, standing in the Holy Place let the reader understand…”  Matthew 24:14-15

Understand what? That an event that had taken place in their history that they knew about very, very well and that they remembered annually in a special festival holiday, would happen again at the end of all things just prior to His return. The ‘Abomination of Desolation’ was a description given for the placement of a blasphemous false god installed in the Holy Place in the Temple of God, and that pre-supposes that there will be another Temple built in Jerusalem and that another despotic dictator akin to Antiochus IV Epiphanes, will desecrate it in the same way.

We also know that Yeshua wasn’t saying that Herod’s Temple would be the temple to be defiled because He prophesied that temple would be destroyed without one stone being left upon another, by invading armies that would lay siege to Jerusalem and that’s exactly what happened in 70 AD by Titus Vespasian. So Yeshua was in fact pointing to another temple…the third Temple that has yet to be built. (Luke 21, Mar 13, Matt 24)

When will this take place? We have no idea and today the Temple Mount is the most contentiously fought over piece of real estate on planet earth, but since we know God’s Word has never and will never fail, we simply watch and wait while recognising that we are 2000 years closer to this coming to pass.

The Temple Institute in Israel has already produced all the necessary furniture for the next Temple as well as all the vessels, clothing and instruments required for worship and most recently, they’ve begun production of the olive oil necessary for lighting the Menorah. Only God knows when these things will take place and our confidence is not in a temple or a building or in the production of olive oil, rather it’s in God’s Word that is the final authority not only of our lives but over history past, history present and history future. These things simply prove to us that God’s Word is true.