Rosh Hashana – The Feast of Trumpets and the Jewish New Year 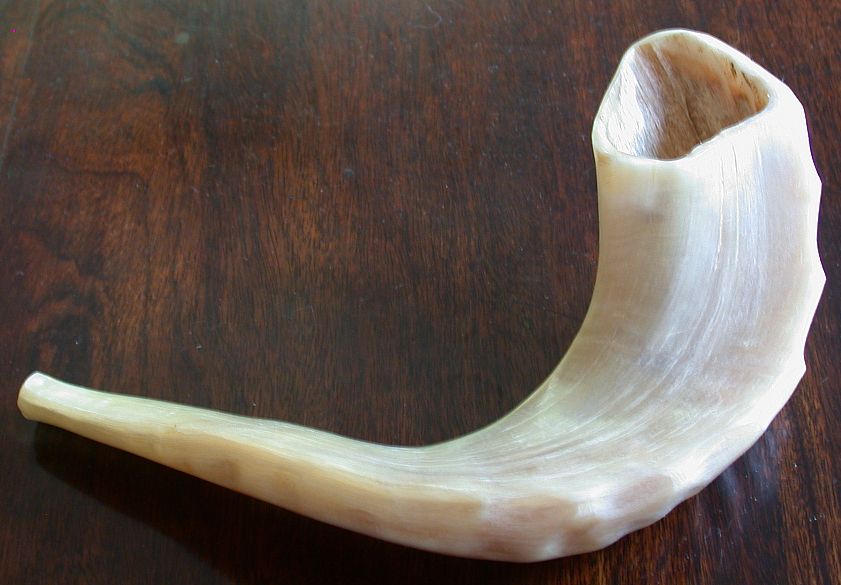 A small Shofar made from a Ram’s horn.
©Olve Utne

This celebration lasts 2 days and unlike our western celebrations which become an excuse to drink excessive amounts of alcohol, eat excessive amounts of food, make excessive amounts of noise keeping neighbourhoods awake until the wee small hours of the morning, leaving excessive amounts of rubbish all over the place and watching fireworks demonstrations, the Jewish new year is a time of introspection, reflection of mistakes and poor choices during the previous year with the determination to make necessary changes to avoid the same thing during the new year…similar to making new year’s resolutions but with a greater emphasis on spiritual and ethical matters. It’s still a very joyous celebration but the serious side of this feast is the primary focus.

In the Bible this festival was instituted in Leviticus 23:24, ‘In the seventh month, on the first day of the month, you shall observe a day of solemn rest, a memorial proclaimed with blast of trumpets, a holy convocation.’ (A ‘convocation’ is a calling together or a formal assembly for a specific purpose)

This festival is also known as ‘Yom ha-Zikaron’ which means ‘The Day of Remembrance’ and also ‘Yom Teru’ah’ which means the ‘Day (feast) of Trumpets’. Rosh Hashana is celebrated over 2 days because of the difficulty in pin-pointing the exact timing of the new moon upon which the festival begins, it’s commonly believed that no one knows the day or hour of this particular feast so to make sure they don’t get the timing wrong, they cover their bases with a 2 day celebration.

It’s also believed in Jewish tradition that God created the universe on 25th of Elul making 1st of Tishri the 6th day of creation and this festival was to be celebrated with the blowing of the shofar. The shofar is blown 100 times during Rosh Hashana (hence the name ‘Feast of Trumpets) using various styles and the shofar blasts are a coronation of God as King of the Universe. They’re a reminder for us to remember that God is our Creator and that He is our King.

There are 4 primary shofar blasts:

The general custom during Rosh Hashana is to first blow Tekiah, the coronation and honour of the God the King, then to follow with Shevarim for repentance before Him, then followed by Teru’ah for the souls response to the call of repentance and then the closing with Tekiah ha-Gadol – the ‘Last Trump’. 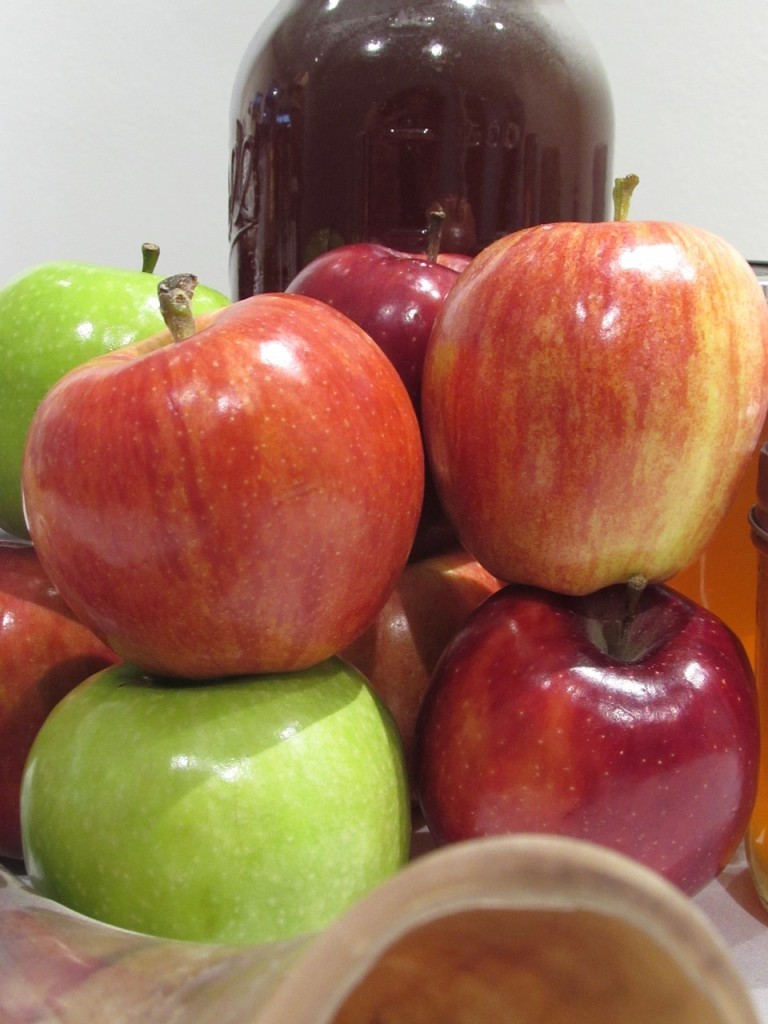 The traditions that surround Rosh Hashana include lighting candles and reciting prayers and blessings; serving apples and bread (khallah) dipped in honey before the meal to wish one other a sweet year ahead; round shaped khallah (bread) is served to represent the crown of God’s kingship and from a Messianic perspective, it’s a reminder that those who obey the Lord receive a crown of righteousness from Him. Often the round khallah bread is baked with honey and raisins. Sweetness is always associated with Rosh Hashana.

Usually on the afternoon of the first day of Rosh Hashana, Jews perform a ritual called ‘tashlikh’ which means ‘casting off’, where they symbolically cast their sins into a body of water by emptying their pockets and casting the contents into the river, stream or creek. Micah 7:18-20, Psalm 118:5-9, 33 and 130 are recited during the Tashlikh ceremony. Rosh Hashana is also believed to be the time when the righteous are written in the Book of Life and the unrighteous are written in the book of death in Jewish tradition; this tradition believes that all people have 10 days during the Days of Awe to repent and determine their fate. These are Jewish traditions, they’re not found in Scripture but they hold great symbology of what is in Scripture.

Another major theme that is focused on during Rosh Hashana is the Akedah Yitzchak – ‘The binding of Isaac’. In Jewish tradition God told Abraham that the shofar was to be blown on Rosh Hashana to remind the people of God’s substitutionary sacrifice when He provided a ram to replace Isaac.

Rosh Hashana is also known as ‘The destiny of the Righteous’ interestingly enough and it begins what is termed the Days of Awe and they lead into the most holy and solemn day of the Hebrew calendar known as Yom Kippur – the Day of Atonement – which we can look at next week.

From a Messianic/Christian perspective, it’s important to understand that ALL the feasts of the Lord are fulfilled or yet to be fulfilled by Yeshua. With regard to Rosh Hashana, there are 7 really important points to look at in relation to what we’ve just learned about Rosh Hashana.

Yeshua IS the King of the Universe, the Creator and Redeemer. In Hebrew the term is Melech Gadol al-kol-ha’aretz – ‘Great King over all the earth’ (Psalm 47:2); Yeshua is called the Mashiach which denotes His kingly dignity and royalty; He is the Creator and Sustainer of all life (Colossians 1:16).

The month of Elul which is before Tishri and Rosh Hashana is a month of preparation for Rosh Hashana and for honouring God. For the believer in Yeshua, we are warned to be ready and watching, earnestly awaiting the return of our Messiah. Yeshua spoke often of the need for repentance by individuals before God and repentance is linked tightly with salvation and the blowing of the shofar (trumpet) is to awaken the conscience to be sensitive to sin and deal with it accordingly. (Mark 1:15; Rom 10:8-13)

There is prophetic significance for the Christian in Rosh Hashana; because this particular feast has such trouble with its starting point because of the issues regarding the new moon, no one really knows the exact hour or day of its beginning and this is the same characteristic of the return of Yeshua to take His Bride away.

He Himself said, “But of that day and hour no one knows, not even the angels of heaven, nor the Son, but the Father alone.” (Matt 24:36; Mark 13:32)  Yeshua has promised to return to snatch His Bride away and in fact He has promised that this event will occur ‘at the last trump’ and the last trumpet blast of Rosh Hashana is called the ‘Last Trump’.

We don’t know what day or hour Yeshua will return, but we’re to be watching and waiting and ready when He does. ‘Behold, I tell you a mystery; we will not all sleep, but we will all be changed, in a moment, in the twinkling of an eye, at the last trumpet; for the trumpet will sound, and the dead will be raised imperishable and we will be changed.’ (1 Corinthians 15:51-52)

The Talmud (not inspired Scripture by any means) states that on Rosh Hashana, the dead will be raised which corresponds with the words of the Apostle Paul.

The ‘Tashlikh’ (casting off of sin ceremony) is a reminder of the new beginnings we have through Yeshua because He has cast our sins away from us and cleansed us from them all. (1 Jn 1:9) Yeshua became the bearer of our sin and we can know absolute forgiveness and newness of life because of His sacrifice. (1 Pet 2:24)

As believers, we rejoice that because of Yeshua’s sacrifice on the cross on our behalf, and our faith and trust in Him, our names are written in the Lamb’s Book of Life and it is appropriate that we express and demonstrate gratitude and thankfulness. (Titus 3:5-6; Rev 20:12, 15, 21:27)

The Akedah Yitzchak – the ‘Binding of Isaac’ and God’s subsequent provision of a ram to replace Isaac as an offering is of course a pre-cursor to God Himself providing His only begotten Son Yeshua, to be the ultimate substitutionary sacrifice for the sins of man. We should be ever grateful and eager to celebrate this incredible sacrifice on our behalf by Yeshua, the Creator of the Universe.

Prophetically, Rosh Hashana is a celebration of new beginnings and the beginning of the Days of Awe leading up to Yom Kippur – a national day of repentance and agony over sin – which pre-empts the ultimate and hopefully near future repentance of national Israel and her subsequent belief in and salvation from Yeshua their Messiah. Rosh Hashana is the celebration of this momentous prophetic future of the nation of Israel and her destiny with her Messiah. (Rom 11:26) It truly is a celebration of the destiny of the righteous through Yeshua the Messiah.

The Feasts of the Lord are not obsolete, insignificant holidays that have no importance or relevance for Christians, in fact the opposite is true. We can learn an enormous amount about God’s nature and character, His love and faithfulness to all people and most especially to His people Israel, and we can learn a phenomenal amount about the future, not to prognosticate – which is sinful – but to prepare and eagerly await God’s promises and His return. In fact, God has promised a very special blessing to those watching and waiting for His return.

2 Timothy 2:7-8, Paul said, “I have fought the good fight, I have finished the course, I have kept the faith; in the future there is laid up for me the crown of righteousness, which the Lord, the righteous Judge, will award to me on that day; and not only to me, but also to all who have loved His appearing.”