Hope is coming to Blacktown

There is real hope in Blacktown! Of the twenty suburbs in Ward 5 of Blacktown City Council, fourteen are dominated by public housing. Blocks of units are set aside for prisoners when they first get out of jail. Local councillor Jacqueline Donaldson admits:

‘They are pretty bleak places. But if the prisoners came to the Lord in jail, it would make a huge difference to their lives. And if they come into those units, it would be wonderful.’ 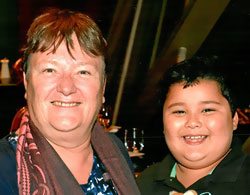 An avid Vision listener, she’s also passionate about prison chaplaincy and was delighted to be part of our Bringing Hope Behind Bars campaign. We’d hoped to raise enough money to give a copy of The Prison Bible as well as The Word for Today to 5000 prisoners but, as a result of our supporters’ amazing generosity, that target was smashed.

A Bible and a year’s supply of devotions can now be made available to 8,053 prisoners—23% of Australian inmates.

‘…THE DAY’S MESSAGE FROM THE WORD FOR TODAY… GIVES ME AN OPENING TO TALK ABOUT JESUS WITH PEOPLE WHO NEED HIM.’

Jacqueline is well acquainted with the needs of prisoners. In the late seventies and early eighties, she helped the ministry of Broken Chains take Christian bands into different institutions, using the vehicle of a concert programme to present the Gospel. She soon discovered the need for follow–up for those who make a commitment—without Bibles, resources and fellowship, they soon fell back into their old habits. That’s why she was so excited by this initiative.

In her full and varied life, she’s been a teacher, lay preacher, coordinator for a divorce, separation and bereavement group as well as a local councillor. She’s open and bold in finding opportunities to present the Gospel.

‘I get to go into mosques. There are maybe 500 men and twice as many women. I read a Scripture as well as a piece from the Koran. I tell them that Jesus is far more than a prophet.’

From a Prisoner:
‘It took me three weeks to get a copy of the Bible in jail… they’re very scarce. So the Prison Bible is going to be an awesome thing for inmates. The Word for Today is very inspirational. I’d wake up each morning in my cell and start with it. That book and that word can change lives.’ – Rod

She’s thoughtful as she talks about her commitments with constituents.

‘When a meeting is coming up, I pray God will provide me with something just for them. Often—not always, but surprisingly often—the day’s message from The Word for Today is just perfect. That gives me an opening to talk about Jesus with people who need Him. Sometimes the devotional message is even applicable to the situations with the officers in council. God has really been at work here. The Christian councillors here have been able to bring back prayer at the beginning of meetings and we’ve been able to invite in ministers of churches too.’

Jacqueline recognises the hand of God in so many of her interactions. ‘I buy books from the Vision Christian Store,’ she says. One purchase that’s been especially meaningful to her is an Action Bible she gave to a deeply depressed girl in Year 9 at a local school.

‘When I was starting to read the Bible at eleven years old, I had a cartoon Bible and it really helped me. So that’s why I thought of it. Even the girl’s psychiatrist has told me what an impact I’ve had on her. That’s a huge responsibility. But I keep in touch and ask her where she’s got up to in reading her Bible.’

Vision is thrilled to be in partnership with Jacqueline and others like you!