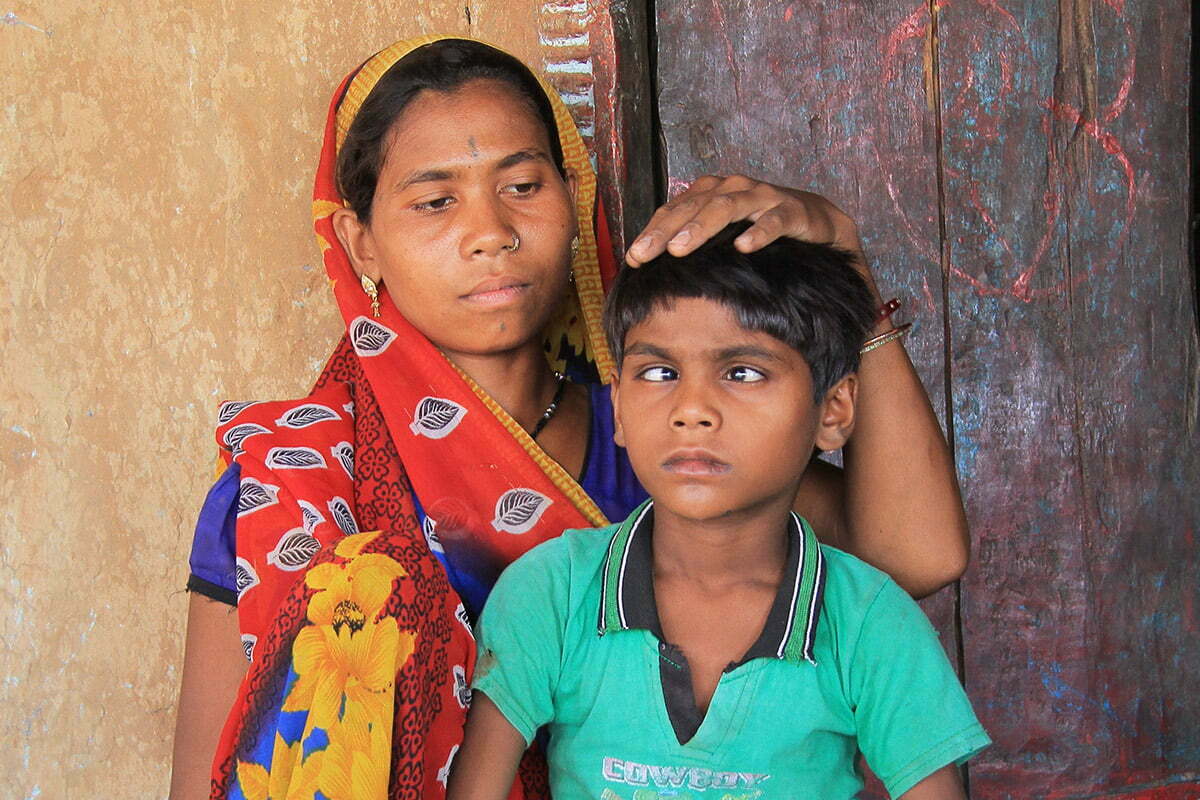 The COVID-19 pandemic has had a catastrophic impact on people with disabilities, including those with cataracts, making it even more challenging for them to access life-changing health care and the cataract surgeries that could save their sight.

Gokul was only one year old when his mum Aaroli noticed something was wrong with his eyesight.

“Gokul was about a year old when I realised he has a vision problem. Some months later, when he started to stand and walk, he would often hit a wall or fall down into a pit,” she explains.

By the age of six, Gokul would watch longingly as his younger brother left for school each morning. Gokul desperately wanted to join him, but his vision was so bad he wasn’t able to.

“He asks me when he will attend school… and I don’t have an answer.” laments Aaroli.

Instead, the intelligent little boy spends his days alone in his family’s hut, struggling to recognise objects only a few metres away.

Unbeknown to his family, when Gokul was a baby, he developed cataracts which blocked his vision in both eyes.

His mum took him to a neighbouring village to see a traditional healer, but the intervention didn’t restore his vision and things continued to deteriorate.

Cataracts, a clouding of the eye’s lens, are the world’s leading cause of blindness. A quick surgical intervention can restore sight for people living with the condition in around 12 minutes.

This was the case with Gokul, who lives in a remote Indian village which only received electricity a year ago and has no access to health centres.

Gokul’s family didn’t have the money to get his eyes checked, which meant they didn’t understand how serious cataracts can be.

Children with cataracts only have a small period when they can receive treatment in the early years of their life. The longer they wait, the more likely it is that future surgery will not be successful.

“We can’t afford the transportation costs to the hospital. How can we pay for his treatment?” asked Aaroli sadly.

Gokul is just one of around 20 million people across the world who live with untreated cataracts. His family’s story of being unable to access or afford health care is a sadly common one.

This Miracles Day, 19 August, Australians are uniting with a goal to give 50,000 Miracles of sight-saving surgery to people with cataracts, living in poverty.

You can help change the life of someone like Gokul. Just $33 will provide surgery needed to remove cataracts and restore their sight – forever.

You can give someone a Miracle today at miraclesday.com.au or by calling 131 226.

“This was a clear-cut First Amendment violation, not only of their freedom of speech but of religion as well.”

“There are absolutely no plans to abolish or substantially revise currently authorised liturgies.”

“The freedom to worship and testify about one’s faith and the workings of God is central to the founding and uniqueness of America.”

Thoughts about the Bible (2)

Many people unfortunately are fearful of what the future could hold. Not that they don’t have a hope, but rather they...
Articles, Letter's from CEO Phil Edwards

5 Things that Make Me Happy

What would it take for you to have a good year, regardless of the surprises that come along the way?
Articles, CMAA, Open Doors, Prayer

Christians in Syria and Turkey Call for Prayer After Deadly Earthquake

Churches in Turkey and Syria are calling for Christians around the world to pray, after the massive 7.8 magnitude...
20Twenty, Articles, Bible Teaching, Christian History, Creation

The Bible speaks clearly and firmly against racism. It is an affront to God’s will, which is that all people...
×