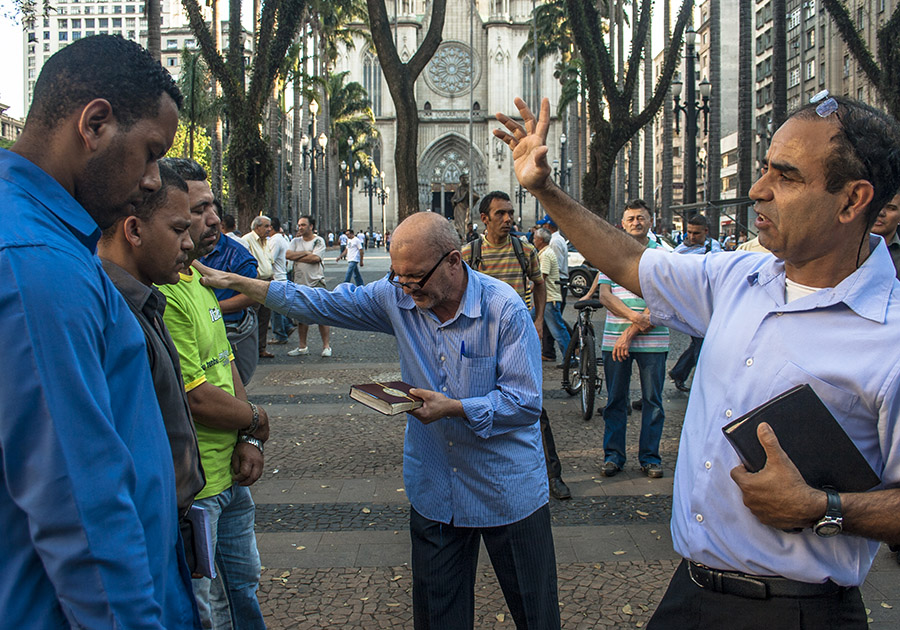 Christians are often seen as “moral outlaws” in 2019 Australia. We’re now being pressured to leave our ‘bigoted’ views behind, at least out of the public square.

And the temptation for Christians is to panic and become alarmed, as if God has forfeited His divine rule over the West.

So how do we live as Christians in this brave new world? How do we evangelise in this increasingly alien context?

I recently had the pleasure of attending the 2019 Nexus Conference in Sydney, co-hosted by The Gospel Coalition Australia. Pastor Mark Dever from Capitol Hill Baptist in Washington D.C. was one of the speakers (among several fine Aussie speakers). Dever – who lives in one of the most secular corners of the USA – made many important observations about evangelising in this post-Christian world. 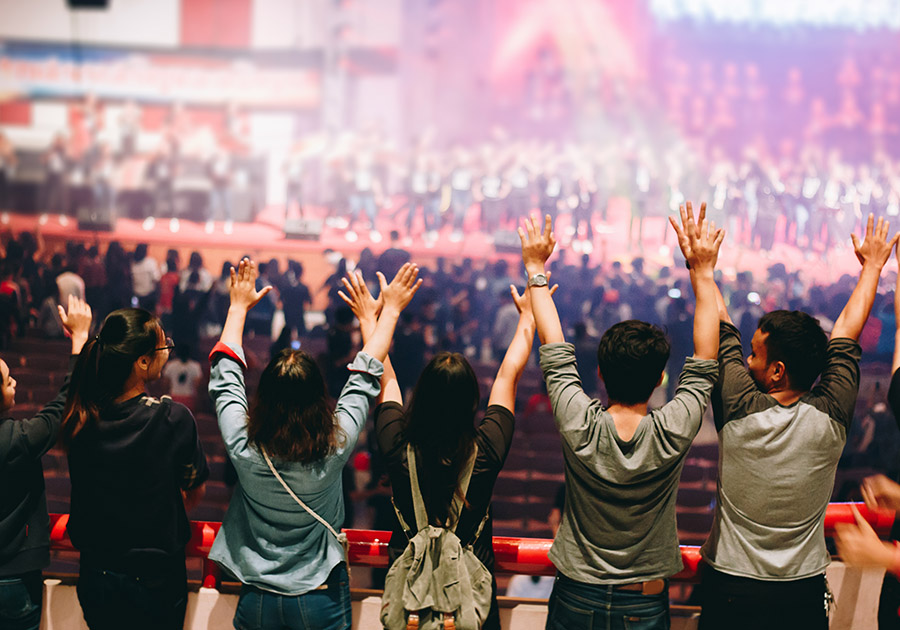 1. Remember That Churches Exist To Work For Supernatural Change

We’re preaching the gospel to the graveyard.

While culture has shifted away from Judeo-Christian worldview that undergirded the western world, one thing has not changed:

Human beings are just as spiritually dead now as they have ever been.

Non-Christians are no more spiritually dead now in this post-Christian age, than they were in Calvin’s Geneva, or 1950’s Australia. Spiritual death is the natural condition of human beings since Genesis 3, and so it’s no harder now to raise dead people, than it was in Jerusalem as Peter preached to the masses (Acts 2). We’re proclaiming the gospel to a graveyard: we always have been, and until the return of the Lord Jesus, we always will be.

In that crucial sense, evangelism has not changed one bit, despite the massive cultural shifts we’re experiencing.

2. Persecution is Normal for Christians

Jesus promised his followers they would be persecuted by the world.

Back in high school, the worst pressure I experienced was being called a few names (e.g. ‘Bible Basher’). Not exactly pleasant for a sensitive teenage soul, but I survived. Then I joined the army, and the pressure got a little more intense, but again it was little more than words. I think my experience as a Christian in the secular culture of that day was typical.

Fast forward to 2019 Australia, and our fear of persecution has skyrocketed. We’re more attuned to it now than ever before. And yet, persecution was the promise Jesus gave to his followers (John 15).  We westerners have simply had a long reprieve for the last few hundred years.

And so, we need to shift our expectations, and be ready for persecution in whatever form it comes.

But is ‘persecution’ too strong a word for what we’re experiencing (and likely to experience)? Isn’t persecution the violent, physical opposition that many of our brothers and sisters are experiencing in, say, the Middle East or North Korea?

As Dever pointed out, 1 Peter speaks about Christians who ‘share Christ’s sufferings’ (i.e. are persecuted) in 1 Peter 4:12. But the sort of persecution the readers of 1 Peter were experiencing was being ‘insulted’ for the name of Christ. In other words, insults for being a Christian are a form of persecution.

But why are Christians persecuted?

Dever made the interesting point that it’s often secondary issues that elicit persecution. We don’t feel pressured today because of our belief in justification by faith alone, or because we confess Christ as the only Lord and Saviour. We experience opposition because of secondaryissues, such as our convictions around human sexuality.

Yet through it all, the Bible never encourages Christians to play the victim card. While it’s tempting to do so, we need to remember that persecution is often used by God to spread the gospel. For example, the Philippian church was started because Paul and Silas had spent time there in jail. Jesus promised his disciples that persecution – in particular government persecution – would lead to opportunities for gospel witness (Lk 21:10-19). And the gospel spread out from Jerusalem because persecution forced the Christians to scatter further afield (Acts 8). 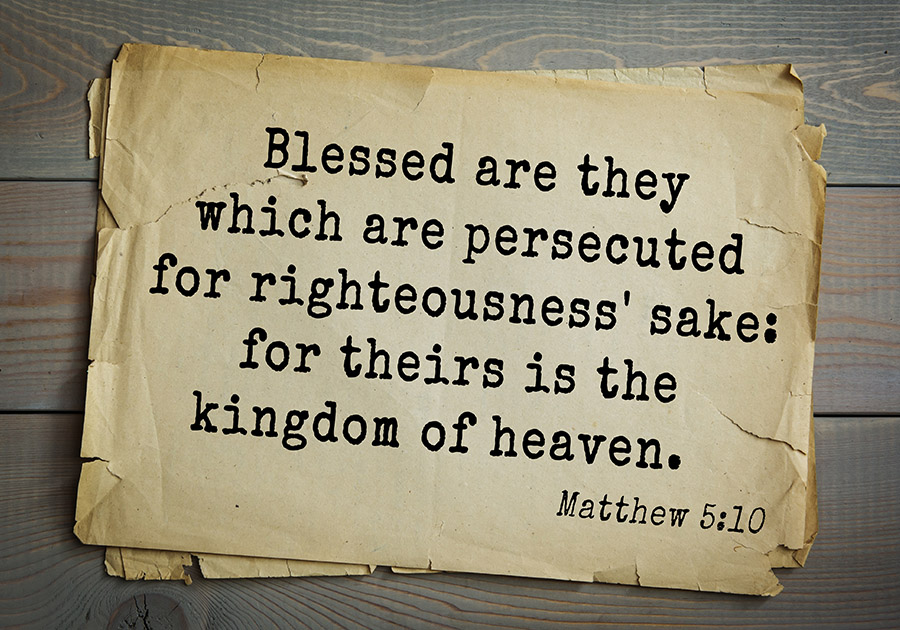 There can never be a perfect world this side of eternity.

Christians should be people of love and justice. We’re to do good to all people (Gal 6:10), as we love our neighbours as ourselves (Matt 22:39).

But as we do this on a personal level, on a corporate level (as churches and denominations), and as citizens exercising democratic responsibility, we’re not going to transform this world into the kingdom of God. That’s above our pay grade. Only God can usher in the New Heavens and the New Earth.

Utopianism is not only unbiblical, it can be downright dangerous (as the various secular utopian regimes of the 20th century testify).

Rather, we’re limited to having an impact on our culture – even if that impact is at times a significant one.

4. Make Use of Our Democratic Stewardship

In our democracy, Christians share in the authority of government.

As Christians who are citizens in a democracy, we share in the authority of our government. And so, if we neglect this (God-given) democratic authority, we neglect the good of people.

In [a democratic system of government]…the state is accountable to the people, who are, ultimately, the governing authorities.

Elsewhere Moore puts it rather poetically:

Shrugging this [political responsibility] off is not the equivalent of Jesus standing silently before Pilate. It’s the equivalent of Pilate washing his hands, so as not to bear accountability for our own decisions and precedents set.’

While no amount of political action alone will soften depraved hearts, we can act to lessen the obstacles to communicating the gospel freely. For example, we can vote for politicians who stand up for religious freedom, rather than erode it.

5. Trust the Lord, Not Human Circumstances

There’s never been a set of human circumstances that Christians can’t trust God through. Jesus beautifully trusted His Father through the horror of the cross. God will prove trustworthy through everything we might have to endure, no matter how persecution we suffer. As we trust Him, we will bear a beautiful testimony of God’s goodness and power. And that will bring Him glory. 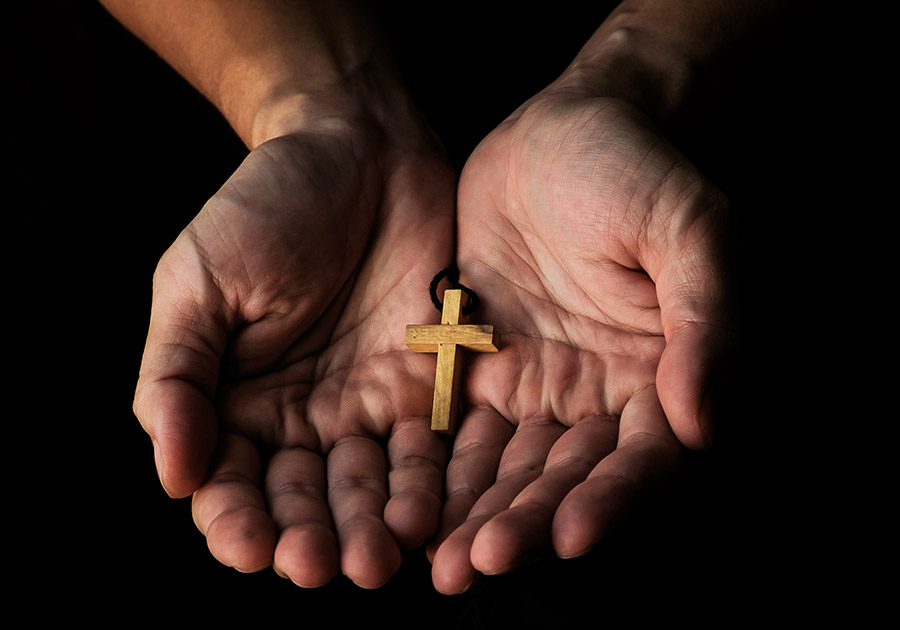 6. Remember Everything We Have Is By God’s Grace

Anything we receive less than hell is ‘dancing time’ for the Christian.

Everything we have is courtesy of God’s grace. We need to keep this perspective, so we don’t become tempted to become bitter toward non-Christian employers, friends, family members, or government when they oppose us. Think of the apostle Paul: how was he able to refrain from bitterness, and rejoice in prison (Acts 16)? Because he knew what he had been forgiven of.

Marxism’s false critique of Christianity is that we preach a pie in the sky, that it’s an opiate making you forget the real trial around you. But Marxism is wrong: our knowledge of our eternal and lasting possession (Heb 10:34) is exactly what allows us to be so weirdly loving and generous now to others, because we are secure in the eternal inheritance we have.

We don’t have to think like our poor Marxist friends, who think that this life is all there is. This eternal perspective is the reason for our being weirdly loving, and ready to share the good news whatever the opposition.

7. Rest In The Certainty of Christ’s Victory

The gates of hell will not prevail against the Church of Jesus Christ.

Each nation and age attacks God and His people in various ways, but none will succeed any more than the crucifixion succeeded in defeating Jesus. Jesus died, but three days later he was raised from the dead. Christ’s kingdom is in no danger of falling, neither here in Australia, nor overseas in places where the persecution is more severe. We need to know this deep in our bones. ‘D-day’ has happened (with the death and resurrection of Jesus Christ) – now it’s ‘clean-up time’, as we proclaim Christ’s victory.

Not one person that God has elected to save will be lost because of the secular agenda that seems to be winning in our time and place. Thus there shouldn’t be anxiety or desperation in us – urgency, yes. But not fear. 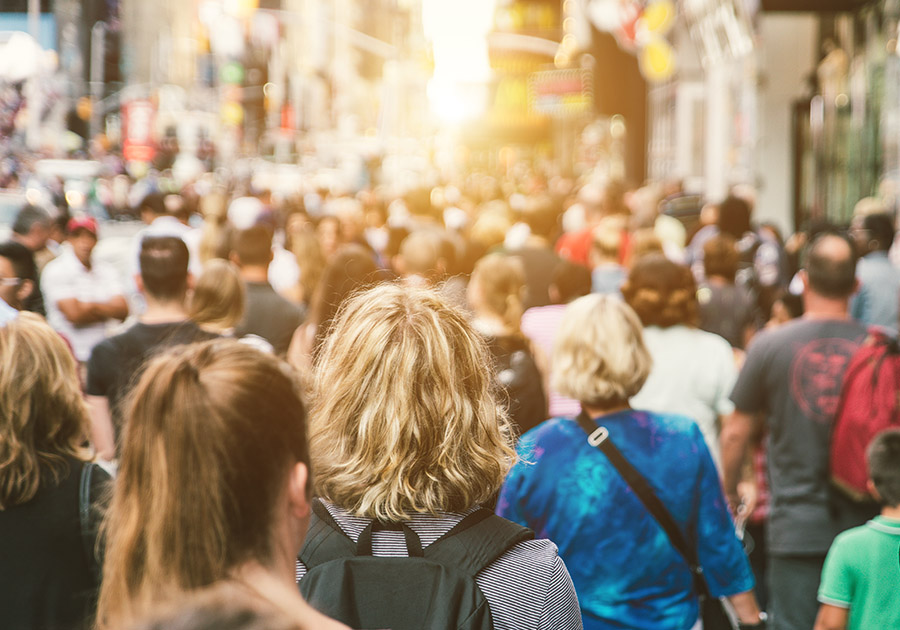 8. Understand the Difference Between ‘Macro’ Culture, and ‘Micro’ Culture

As we look out on the cultural landscape, we can assume that all non-Christians think like inner city secular elite: that they’re suspicious, even hostile, toward Christianity.

But there seems to be a sizeable difference between what Joe and Sally two doors down think about Christianity, compared to how secular academics from the gender studies department’s think about Christianity. Needless to say, there’s often a sharp distinction. Indeed, for many irreligious ordinary people Christianity has become a novelty – something that arouses curiosity rather than suspicion. Even among students on university campuses.

And so it’s useful to keep this in mind as we look to sharing the gospel with friends, coworkers, and family.

It’s Darkest Before The Dawn

We know Christ will return and set everything right. And so we want to share that good news with as many as possible. Now is not the time to panic or retreat. Instead, now is the time to keep proclaiming the gospel to a dying culture, knowing that there is no other name under heaven by which we might be saved. 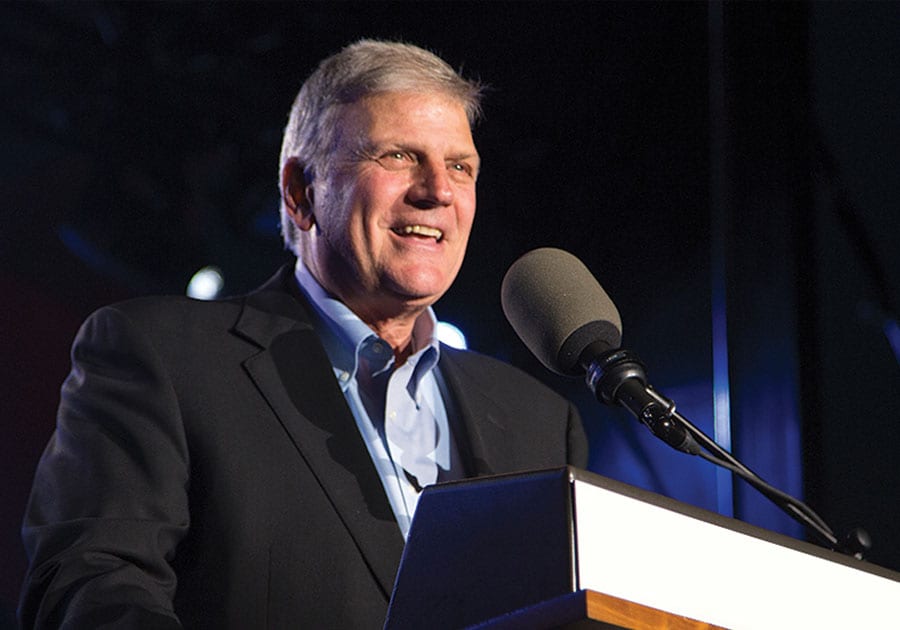 Is it Too Late for Revival in Australia?
Franklin Graham

With changing laws and views on abortion, euthanasia and same-sex marriage, is it too late for revival in Australia? Or is the Gospel exactly what Australia needs to hear right now? More... 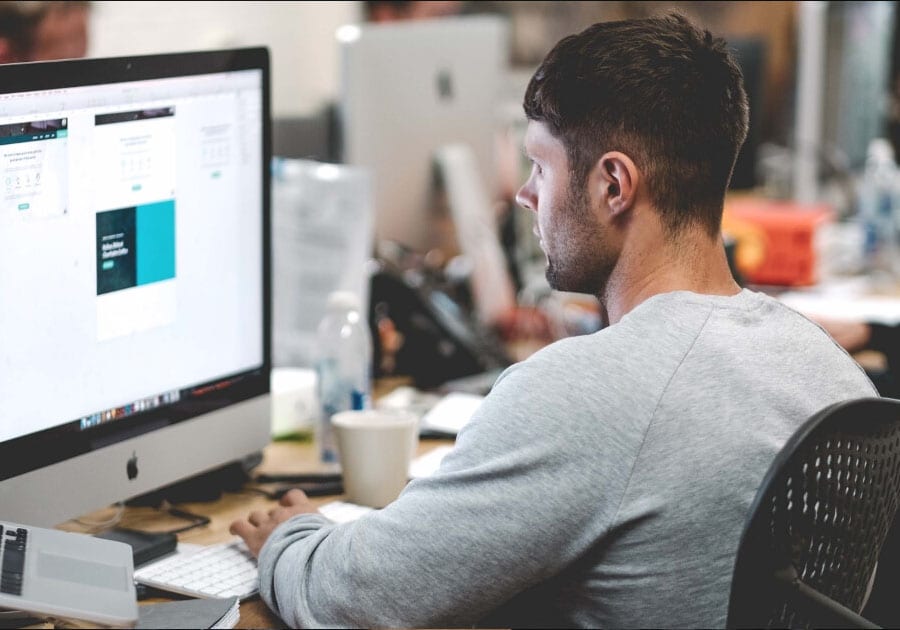 When it comes to sharing our faith and impacting the environment around us, it can be hard to know what the best approach is. More...

Images in this article are from Shutterstock