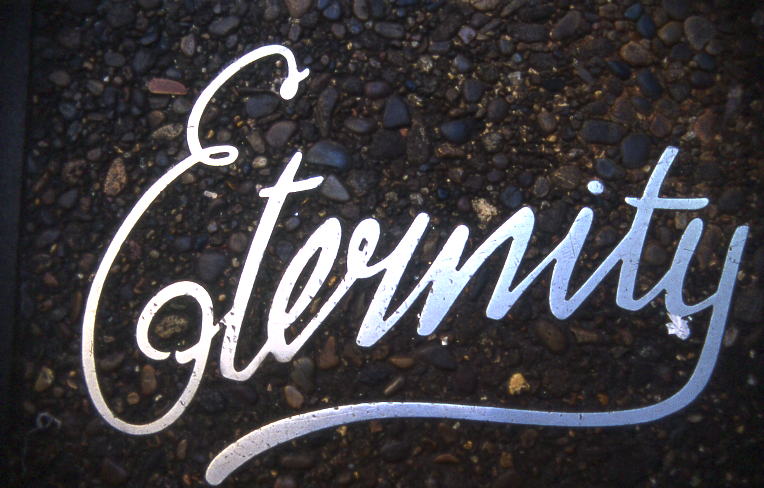 “He was the cleaner and caretaker of the church.”

“What made me respect Arthur was his humility,” Elizabeth recalled. “He was a very humble man. He was extremely shy and he didn’t push himself forward in any way.”

A drunk and a criminal

At the turn of the century the whole world was watching Australia’s Sydney Harbour bridge with its lightshow fireworks extravaganza.

But what was significant was the word emblazoned across the bridge; and that one word was Eternity  –  a word made famous by its writer, Arthur Stace.

Arthur has been described as a battler, a former drunk and a criminal, who chalked up the streets , country NSW, Newcastle and Melbourne.

Arthur’s mission – to write that one word, Eternity.

Over 35 years he did just that, many thousands of times, spending 2 to 5 hours every day writing Eternity on the streets of Sydney.

‘I was a little wary of Arthur’

Elizabeth said she was just a little girl when she met Arthur.

“I was just about 10-years old when my father was invited to be the minister at the Burton Street Baptist Tabernacle in Darlinghurst. That’s when I first met Arthur and his wife Pearl who were part of the membership of the church.”

Elizabeth said they didn’t know about Eternity at the time and besides that, she was a little wary of Arthur.

“Being so young and living out in the western suburbs I hadn’t met anyone like Arthur.”

What Elizabeth remembered was Arthur’s weathered face, that he was tiny and had a gruff little voice, and there was something different about him. So it took her some time to warm to him. She also noticed the respect her mother and father had for Arthur.

“He was the cleaner and caretaker of the church along with his wife and they went about their work daily. I know my parents felt they did their job very well.”

“Pearl cooked meals at the church on Wednesday and Sunday evenings,” Elizabeth added.

“What made me respect Arthur was his humility,” Elizabeth recalled. “He was a very humble man. He was extremely shy and he didn’t push himself forward in any way.”

It seems like a contradiction in some ways, that a church cleaner has become somewhat of a folk hero to the nation. Elizabeth said they didn’t know who he was at the time, although it was her father who first discovered Arthur writing the word Eternity.

He said, “Arthur, are you Mr Eternity?” ‘Guilty your honour,’ was Arthur’s reply to which he followed up with a plea. ‘You won’t tell anyone will you.’

“That was when my father discovered just how shy and humble Arthur was.”

“He didn’t want any notoriety, he didn’t want publicity, he just wanted to go around doing what he believed God wanted him to do. My father knew he had a big story on his hands but getting Arthur to tell it was another story.”

Elizabeth said it took another 5-years before her father finally persuaded Arthur to go public with his story. Once that story was told as Arthur entered the last 10-years of his life, he became famous.

“Everyone wanted to know about him, the press followed him everywhere he went, and no matter he did or said, he had someone following him in the press.”

But Arthur wasn’t happy with all the publicity.

‘He was a different person when preaching’

“It was his humility that impressed me most of all.”

Arthur wasn’t fazed by the publicity, probably because he never chased after it. Elizabeth said Arthur just wanted to continue with his ministry.

“He loved his Open Air meetings and he did that on Saturday nights for 24 years. And when he got up in the open air he was a different person.”

“He was loud and he shouted out full of exuberance, he preached the Gospel of the Lord. He used to get up to all sorts of tricks to get people to watch and listen to him.”

“He had a lot of self-deprecating jokes he’d tell about himself. He’d say, ‘God saved me from the gutter-most to the uttermost’,” Elizabeth never forgot how Arthur would be bouncing around the stage.

But off the stage and in the church, Arthur was back to his quiet and shy self except he was in the habit of bashing old hymn books to bits. He would slap the books on his leg and destroyed about four in this manner.

But Arthur could draw a crowd and many people would go into the city, especially on a Saturday night to hear him.

“He really was so full of God’s Spirit and so pleased to have this wonderful salvation, he was just so excited about it,” Elizabeth shared.

“He’d tell the story about his childhood but not the whole story. He really wanted to win as many people to the lord as he possible could.” 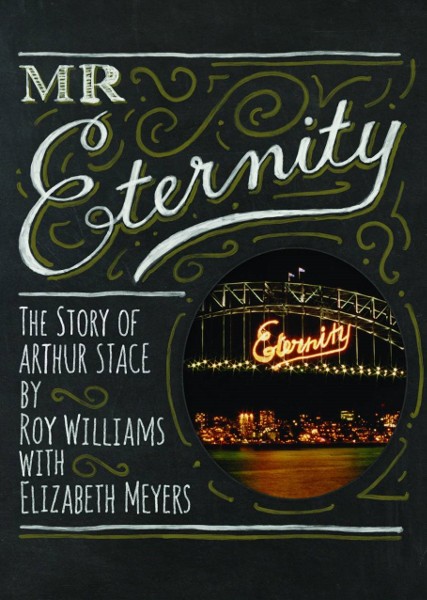 Arthur Malcolm Stace (9 February 1885 – 30 July 1967), known as Mr Eternity, was an Australian soldier. He gained fame as a reformed alcoholic who converted to Christianity and spread his message by writing the word “Eternity” in copperplate writing with chalk on footpaths in and around Sydney, from Martin Place to Parramatta for about 35 years, from 1932 to 1967.

Stace was born in Redfern, New South Wales, in inner west Sydney on 9 February 1885.The fifth child of William Wood Stace, from Mauritius and Laura Stace (née Lewis), a child of alcoholics, he was brought up in poverty. In order to survive, he resorted to stealing bread and milk and searching for scraps of food in bins.

Stace converted to Christianity on the night of 6 August 1930, after hearing an inspirational sermon by the Reverend R. B. S. Hammond at St. Barnabas Church, Broadway. Inspired by the words, he became enamoured of the notion of eternity. Two years later, on 14 November 1932, Stace was further inspired by the preaching of evangelist John G. Ridley MC, on “The Echoes of Eternity” from Isaiah 57:15:

‘For thus saith the high and lofty One that inhabiteth Eternity, whose name is Holy; I dwell in the high and holy place, with him also that is of a contrite and humble spirit, to revive the spirit of the humble, and to revive the heart of the contrite ones.’