“What we’re doing is working with community schools run by parents and social entrepreneurs who have said ‘enough is enough, I want an education for my child.’”

“Over the next 40 to 50 years we might have the opportunity to get every child in school.”

Education is one issue. Another is the damage caused by well-meaning charities and NGOs and their aid programs.

“Buy a pair of shoes and give one pair to someone in Africa. Well, when you dump a bunch of shoes on a community, what happens?’

“The cobblers go out of business and you’ve actually disempowered local trade.” 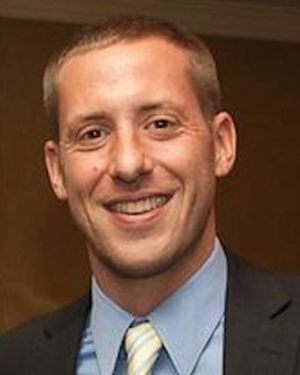 Firstly to girls education, Nathan Byrd who’s the head of Global Programs of Opportunity International describes what has been achieved so far for girls education in developing countries as akin to a bit of ‘a castle on a cloud’ in terms of getting girls into school.

Notwithstanding, access to education has brought powerful results in gender parity.

One outcome has been an equal percentage of girls and boys in the average classroom across many developing countries.

But despite the progress made by governments, agencies and funders, a major hurdle is just having girls accepted into schools in the first place.

But for Nathan, there’s been an incredible amount of money dispatched for a far from impressive result.

“With the Millennium development goals kicking off in 2000 and going for around 15 years and dumping around 10.1 billion dollars a year in education funding to governments, we thought we were actually solving the problem,” Nathan remarked, adding that with all that money they’ve still only scratched the surface. 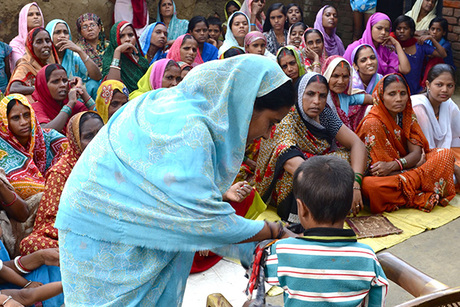 “It’s the tip of the iceberg. What we’re finding to get girls into school there are two additional problems. One is keeping them there by confronting cultural issues and understanding equity and real needs across the gender barrier.”

‘We’re running out of donor aid’

The other issue is the economics.

“If government funding can’t do it then what hope does temporary development aid have?”

“You still need a tax base to fund it,” Nathan informed, saying it doesn’t exist yet and that’s the challenge for Opportunity International, with the problems made worse by an ever shrinking donor aid pool that’s drying up.

“We’re running out of donor aid and it’s not that the money’s disappearing. We’re capricious in what we give, we change our motivations, we want to do so much but there’s just not enough to go around for everything,” Nathan admitted.

The problem is the same for governments, and donors would be inclined to think African governments for example are not doing enough. Nathan disagrees.

“African governments on average give a larger percentage of national public expenditure to education every year than any other region in the world, yet are able to do less with that because the pie they’re cutting from is so small,” said Nathan.

School for every child

“So we cannot build, again this ‘castle in the cloud’ counting on permanent development aid so we have to come up with a sustainable solution,” Nathan surmised.

What Nathan Byrd is hearing from public entities in the global sector is the aim to have every child attend school, but that’s a long term goal.

“We actually can’t do that immediately. Instead we need to take the amount of aid which is about 10.1 billion dollars on average per annum and multiply it by seven.”

“And over the next 40 to 50 years we might have the opportunity to get every child in school.”

Nathan said this is nowhere near good enough and considers it to be a moral challenge in need of an active solution. That’s where Global Programs kicks in.

“What we’re doing is working with community schools run by parents and social entrepreneurs who have said ‘enough is enough, I want an education for my child.’”

The objective for Opportunity International is to help these community schools at the grassroots level grow up into powerful agents of change.

“Getting girls and boys into school and keeping them there. For the development of good quality business practices, great educational attainment through engaged and active teachers….”

“…and a culture of change and empowerment for both girls and boys, and not swinging the pendulum all the way to the other side to only educate girls, but swinging it to the middle so it’s sustainable in the way it’s approached as well,” Nathan explained.

A stumbling block to creating the right environment for this vision for grassroots community education facilities to flourish are the myriad of well-intentioned causes all wanting their particular entity to gain the right amount of attention and the funding to match.

Nathan described them as ‘a bunch of well-intentioned people who may not understand local context’, to put it politely.

“It’s very difficult and often impossible to develop good programs for people in need by sitting in our own living rooms and not being party to that reality.”

Nathan used India as an example.

“To help people in rural India requires localisation and without that physical touchpoint it’s just not possible.”

“So how are we going to change someone’s life if we know nothing about that life in the flesh?” Nathan queried, repeating there are a lot of well-intentioned people who just don’t understand what the lives of others really are.

“And their programs reflect that.” The idea of sending clothes abroad for example.

“Conceptually that’s great sitting in our living room. But what we don’t recognise as was the case in Mozambique. One NGO decided they were going to receive a bunch of clothes and give them away to hawkers who could then sell them and create a small sustainable income.”

However….“What this did was undermine the Southern African Textile Exchange so that that industry will never grow locally.”

“Tom’s Shoes is a similar example. Great concept. Buy a pair of shoes and another pair goes to someone in Africa. Well, when you dump a bunch of shoes on a community, what happens?’

“The cobblers go out of business and you’ve actually dis-empowered local trade.”

As Nathan explained situations like this are not empowering.

“These sorts of NGOs and charities with their heartfelt best effort approaches and proliferating them because they sound good, is actually what we want to encourage people not to engage in.”

Nathan said this is why Opportunity International spends so much time localising and taking a concept that keeps girls in school for longer.

“Also to ask questions before we start throwing out universal answers.”

“We’ve learned for example, that girls in conservative Ugandan communities stay at home from school and household chores build up.” 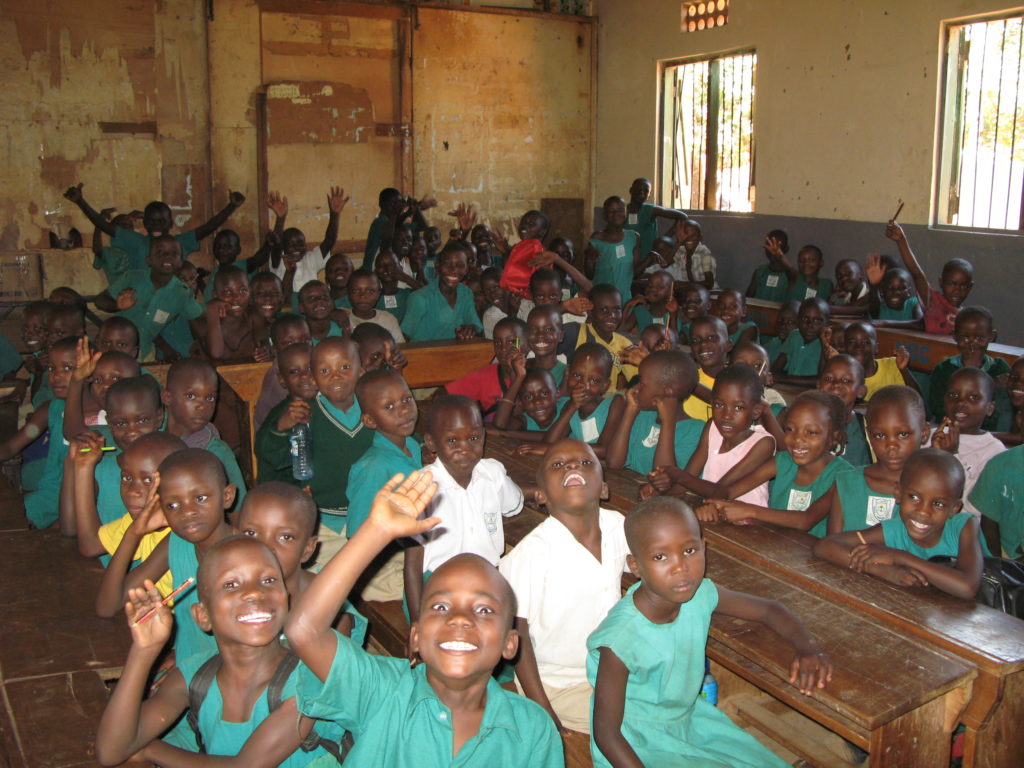 “And we talk to school heads and families about how to fix that in Uganda. It’s resulted in this case in a drive to support girls’ dorms for schools. This has resulted in lesser opportunity for girls to be used by their family at the expense of their education – and it works!” Nathan declared.

When Opportunity International piloted the program in Uganda there was a 17-percent increase in girls’ enrolement at schools.

Focusing on areas with the potential for high-impact sustainable solutions that can reach hundreds of millions of people, Nathan oversees the organization’s portfolio in education, agriculture, health and digital financial services, including focusing on innovative and integrated delivery and promoting sustainable approaches to gender equality and the empowerment of women and girls. In this role, Nathan works closely with the executive leadership team on strategic planning, portfolio management and coordination across the organization’s global activities. He also works across the organization and with external partners and donors to provide a clear vision, build commitment and establish technical processes to shape the organization’s current and future work and ensure program alignment with client needs. Nathan also served as Head of Education Finance for Opportunity International from 2012 to 2017, where he was responsible for developing education-related financial tools for schools and families, forming strategic partnerships in the education sector, and expanding Opportunity’s four-country pilot program. Nathan has provided invaluable strategic direction and leadership for the Education Finance initiative, designing cross-border systems and structures and managing multinational field operations across developing countries.

Prior to joining Opportunity International, Nathan was Deputy Director of Operations for the International Rescue Committee in Kabul, Afghanistan, where he was responsible for a budget of $21.5 million and oversight of all functions, including human resources, financial planning, procurement, logistics, safety and security, field management and new product development.

Previously, Nathan served as vice president of Strategic Development at Covenant House, an organization that helps 60,000 children around the world emerge from homelessness, abuse and trafficking through comprehensive services, including education. Nathan started his career as director of their Latin America operations.

Nathan holds a Master’s in global management from Thunderbird School of Global Management, an MBA from Indiana University and a Bachelor’s in Spanish and English from Saint Louis University. He currently resides in London.

‘MyFriends’ – Those Who Do Community, Not Church – Ryan Sherring