Home Group – On Being Sheep

Psalm 100, ‘Shout joyfully to the Lord, all the earth. Serve the Lord with gladness; come before Him with joyful singing. Know that the Lord Himself if God; it is He who has made us, and not we ourselves; we are His people and the sheep of His pasture. Enter His gates with thanksgiving and His courts with praise. Give thanks to Him, bless His name. For the Lord is good; His lovingkindness is everlasting and His faithfulness to all generations.’ 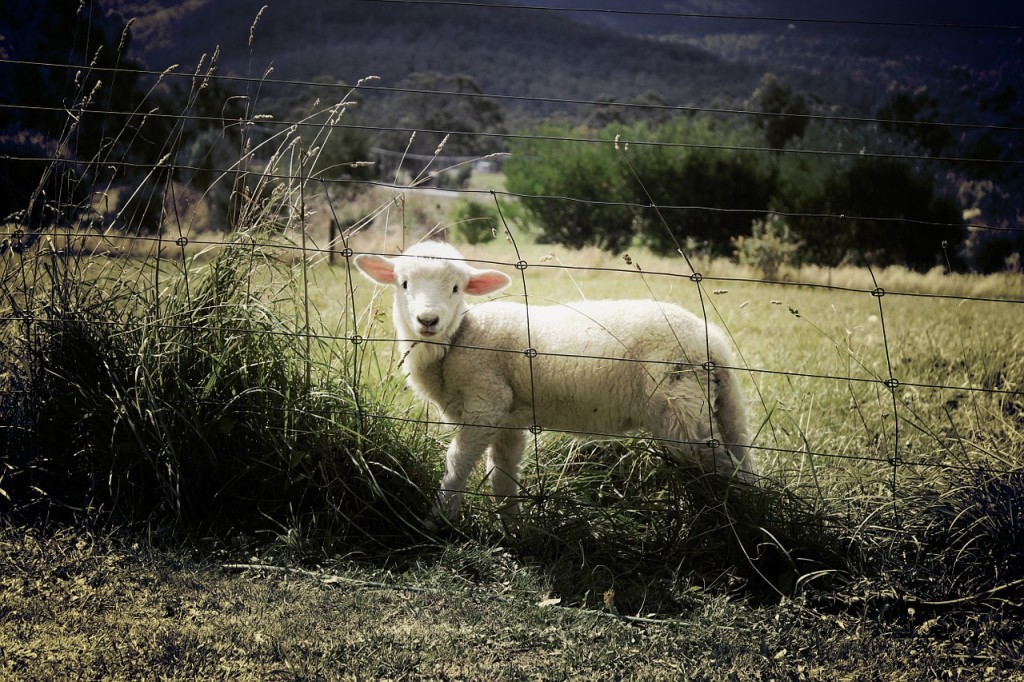 In our western mindset…or our Greek philosophical mindset, Yeshua’s command to “make disciples” can simply mean teaching people certain beliefs about God, helping them believe and accept Yeshua as their Lord and then educating them in doctrinal truth.

Are all these things true and impo

rtant? Absolutely they are, without question, but this can very easily become little more than a mental exercise and the person with the most amount of knowledge is seen as the most mature Christian and a better disciple. Unfortunately, this just makes Christians competitive with each other. It always leads to power grabs and political machinations within church bodies and arguments over who’s right and who’s wrong and this doesn’t necessarily lead to transformed lives.

An eastern view of discipleship is much more synonymous with the Gospel. The eastern view not only emphasises the understanding that Yeshua died for our sins and that belonging to Him requires repentance and faith in Him alone, and holding to sound doctrine and teaching, but it also emphasises that Yeshua lived transparently before His disciples so that He could demonstrate to them how they should live. Then Yeshua’s disciples were able to make disciples which required them to not only understand the fundamental technicalities of the Gospel  and doctrine, but they also were to live their lives transparently so as to teach them how to live out their faith in Yeshua practically every day.

God never wanted to simply fill the world with people who all believed the right things…yes…God does want us to believe rightly according to His Word…but He wants to fill the world with people who will literally, physically live their lives so that they reflect Yeshua in every moment of every day. This is what ‘Walking in the dust of our Rabbi’ is all about. Learning from Yeshua our Rabbi, what He taught AND emulating Him so that our physical conduct, behaviour and conversation reflect Him accurately.

It’s no accident that the Bible uses shepherding to describe the relationship between God and His people, in fact the picture is a beautiful metaphor for God’s kind of discipleship. In so many countries of the world sheep are kept in fenced-in pastures where a shepherd or farmer isn’t required most of the time and the sheep are left to themselves. With that understanding, it’s easy for a Christian in the west to simply think that the great commission is to just get as many sheep into the pen as possible.

However, this is not the case in Israel…grass isn’t that plentiful, the soil is arid and pasture has to be found and that means that flocks are pretty much on the move a lot of the time. While in Israel, I’ve seen shepherds move their flocks around local neighbourhoods, out on the hillsides…I’ve even seen shepherds move their flocks through the city of Jerusalem along the main road out the front of the Garden of Gethsemane along the side of the Kidron Valley! The sheep are only kept in pens or enclosures at night or in winter but during the day the shepherd is with them and he moves them about from pasture to pasture. Shepherding in Israel is a very active vocation.

A lady by the name of Judith Fain who is a Ph.D. candidate at the University of Durham spends several months each year in Israel and one day while walking on a road near Bethlehem, she watched three shepherds converge with their separate flocks of sheep. The three shepherds knew each other and stopped to talk and while they were chatting, their sheep intermingled to form one big flock. She was wondering how these shepherds would be able to separate their sheep and was amazed when each of the shepherds called out to his sheep and at the sound of their voices, the sheep separated from each other and simply followed their respective shepherds. It would appear that some things in Israel haven’t changed for thousands of years.

What Makes Us Different?

What’s makes us (Yeshua’s disciples) different from all others is not the ‘pen’ we live in but the Shepherd we follow. When I was in New Zealand last week we saw a farmer herding his sheep with his amazing sheep dogs and then we watched him sheer a sheep. The sheep didn’t want to be shorn but when the farmer grabbed the sheep, the sheep just submitted and didn’t try to move or escape…she just laid there against the farmer trusting him completely while the farmer dragged her around lifting her legs and turning her around until she was all neatly shorn.

Sheep will always follow a shepherd but they must be sure they’re following the Good Shepherd and not a false or deceitful shepherd…the Bible calls them hirelings. They’re in ‘the game’ for what they can get personally, not because they care about the sheep! Wandering sheep who follow wandering shepherds get lost and dirty, they hurt themselves, they wander into dangerous places where they’re vulnerable to attacks from predators and also to being stolen and deceived by other false shepherds.

Out Good Shepherd leads His sheep out into the world and He’s always on the move. Our Good Shepherd (our Rabbi) expects us – His sheep (His disciples) to follow Him even to the ends of the earth if need be, but to do so, we have to learn to recognise His voice, follow where He leads and imitate Him so we can show the world around us who we belong to and who we emulate and what His Good News is.

Psalm 23, ‘A Psalm of David. The Lord is my Shepherd, I shall not want. He makes me lie down in green pastures; He leads me beside the quiet waters. He restores my soul; He guides me in paths of righteousness for His name’s sake. Even though I walk through the valley of the shadow of death, I fear no evil, for You are with me; Your rod and Your staff, they comfort me. You prepare a table before me in the presence of my enemies; You have anointed my head with oil; my cup overflows. Surely goodness and lovingkindness will follow me all the days of my life, and I will dwell in the house of the Lord forever.’

Did you notice something really important in the psalm? This wonderful Shepherd doesn’t keep His sheep in a pen or a fenced paddock and leave them to their own devices. This wonderful Shepherd remains with His sheep all the time. He’s with the sheep when they sleep, He leads them in quiet peaceful places, He’s with them walking through dangerous and dark places, He ensures they have all their basic needs met be it food, water, rest or shelter. When they’re unwell or hurt He anoints them with oil and soothes their bodies with healing and when they’re surrounded by their enemies, this Shepherd prepares a table of plenty for them despite the threats the sheep are living under. This Shepherd disciplines His sheep with His rod and staff and this brings His sheep great comfort. Under the protection and provision of this Shepherd, these sheep know His goodness and lovingkindness…in all these diverse circumstances and settings. What is the end result for the sheep of this Shepherd…dwelling with the Lord forever!

These sheep know the voice of this Shepherd and no matter where He leads them, they follow…completely trusting Him, and emulating Him and both the world and their enemies see it all. There is no question as to whom these sheep belong or whom they love…they love their Shepherd. He is no hireling, this Shepherd has given His entire life for the benefit and care of His sheep.

John 10:9-15, Yeshua said, “I am the door; if anyone enters through Me, he will be saved and will go in and out and find pasture. The thief comes only to steal and kill and destroy; I came that they may have life, and have it abundantly. I am the Good Shepherd; the Good Shepherd lays down His life for the sheep. He who is a hired hand and not a shepherd, who is not the owner of the sheep, sees the wolf coming and leaves the sheep and flees, and the wolf snatches them and scatters them. He flees because he is a hired hand and is not concerned about the sheep. I am the Good Shepherd, and I know My own and My own know Me, even as the Father knows Me and I know the Father; and I lay down My life for the sheep.”

Parallel this passage with Psalm 23 and you see the same Good Shepherd who leads His sheep in and out to find pasture; out where there are false shepherds (hired hands), wolves and predators, the Good Shepherd protects them from these enemies. He not only cares for the needs of the sheep but He even lays down His own life to protect and save them. 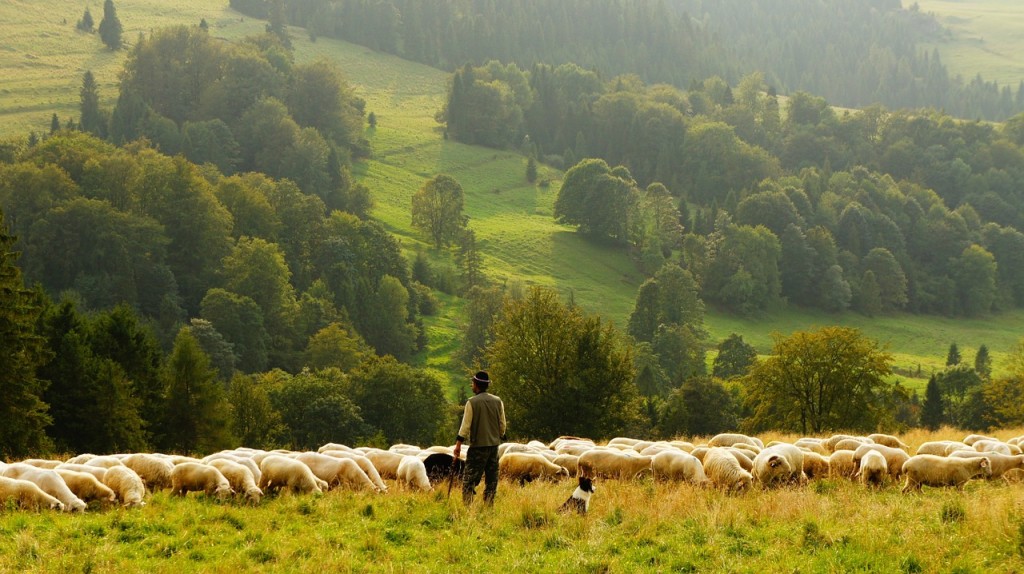 As disciples of Yeshua, it’s not enough to be counted among His flock and spend our life milling about munching on grass within the safety of the pen, we have to follow our Shepherd, listen to His voice and learn from Him, trust Him and emulate Him. The closer we follow Him the more our discipleship grows and living our l

ives transparently before the world as a witness.

The world may hate our Shepherd and because of our connection to Him, hate us as well…but maybe…just maybe…if they see our transparent lives and our growing lifestyle of living like Him, they may also desire to join the flock and follow Him alongside us. That’s when they become a disciple that we can help grow in their faith and mentor with the doctrine and teaching that has been so important and instrumental in our own development and maturity.

As disciples of our Rabbi…we are not only required to share about Him with others and open the gate to let them in, but we’re also required to help other believers become more effective disciples and this continues our own discipleship in Yeshua. The key in all this is living a transparent life before Yeshua and our communities as we daily follow our Shepherd and Rabbi.